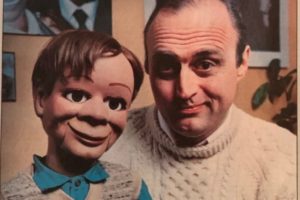 We are sad to announce the passing of two members of our Leftscape family. Alan Semok, Mary’s husband, passed away on Sunday, October 27th. In this episode, Mary enumerates his many creative accomplishments and speaks from the raw place of recent loss. Known as “The Dummy Doctor,” Alan Semok was a ventriloquist with a special expertise in repairing and restoring ventriloquist dummies. He was an accomplished actor and had many unique credits including performing as Larry of The Three Stooges and becoming the voice of Bela Lugosi. Tragically, Mary’s beloved nephew, the funny and talented Pat McCann, also died one week before Alan. Thank you for listening, helping Mary through an extraordinarily difficult time, and honoring their lives.

Considering the distressing nature of the recent events, All the News We Can Handle is on the lighter side. Stories include tracked eagles accruing outrageous roaming charges, Trump getting booed at the World Series, and a ridiculous “Florida Man” story. In a special Rewind segment, Robin and Wendy discuss Episode 60 featuring David Jamison and why Jewish people were not mentioned anywhere in the conversation on how we divide ourselves by race. The show begins in celebratory form, with mentions of National Animal Shelter Appreciation Week, Saxophone Day (November 6th), National Men Make Dinner Day (November 7th), National STEM/STEAM Day (November 8th), World Science Day for Peace and Development and the US Marine Corps Birthday (November 10th), and Veterans Day (November 11th). The birthday people of the week are former pro tennis player Ana Ivanovic, Emma Stone, Sally Field, Lorde, Marie Curie, Gordon Ramsay, Carl Sagan, Emma Gonzalez, Leonardo DiCaprio, and Peaches.

In anticipation of the official launch of the Patreon page next week, The Leftscape will podcast LIVE on Facebook, Friday, November 8th at 7pm from Philcon at the Crowne Plaza Hotel in Cherry Hill, NJ. Mark your calendar, tune in, and become a patron!

More things to do:

Help Mary with medical expenses, final expenses, and incidentals after the loss of her husband, Alan

Watch ‘Lock him up’: Trump greeted with boos at World Series