The Leftscape co-hosts Wendy Sheridan and Robin Renée have long had an affinity for each other’s political and spiritual sensibilities. However, after the shock of November 2016 as many progressive people felt compelled into action, they began to search more deeply for how they could contribute toward reducing harm and increasing the health of democracy. Wendy joined her local Indivisible group and designed postcards for writing to politicians. Robin organized a 31-day freedom of expression online event called Blog March. They wanted to do more.

Daily outrages in the news cycle precipitated by the current U.S. leadership trickled down to inflame personal challenges. Though they both had a rough time of it at the end of 2016 and through 2017 in various ways, the drive to more intentional activism remained and grew clearer. Their shared determination regarding positive political and social change combined with interests including personal growth, creative arts, and conversations within and between cultures. The Leftscape podcast was born. The first episode, Ch-Ch-Ch-Changes, was posted on May 30, 2018. 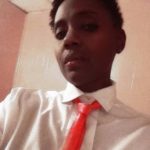 Robin Renée is a recording artist, writer, activist, and longtime organizer in the bisexual and polyamory communities. Hir written work has appeared in Curve Magazine, The Songwriter’s Market, Biff Bam Pop!, WeirdoMusic.com, That Takes Ovaries – Bold Females and their Brazen Acts (Random House), Blessed Bi Spirit – Bisexual People of Faith(Continuum Press), and many other publications. Hir recordings include In Progress, All Six Senses, Live Devotion, spirit.rocks.sexy, This., and “All I Am.” Robin’s work and life flow in the current between black and white, gay and straight, masculine and feminine, monastic and mundane. 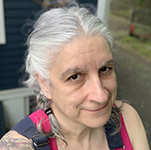 Wendy Sheridan is a multimedia artist, writer, composer and vocalist. She produced two albums as Music for The Goddess: Goddess Mandala and Dancing with Hecate. She now owns her own studio where she is working on illustrating children’s books, small business graphic design, book covers, and graphic novels. She is an ordained minister in the Universal Life Church and performs weddings for people who love each other. In her spare time, she likes to knit, crochet, and quilt. Her fabric stash has grown to exceed her life expectancy. 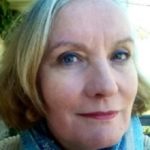 Mary McGinley is a theatre director who has studied the traditional acting styles as well as more physically based disciplines such as Michael Chekov, Viewpoints, Mime, and Clowning. Over her 40-year career as a theater artist, Mary has worked as a director, coach, teacher, fight choreographer, designer, and actor. She has served as casting director and administrator with regional theaters around the country including Carolinian Shakespeare Festival, George Street Playhouse, Cincinnati Playhouse, Orlando Theatre Project, New Jersey Shakespeare Festival, and Touchstone of L.A. An activist, she is the State Rep of the National Organization for Women of Middlesex/Somerset N.J. She is also a proud member of the teacher’s union American Federation of Teachers and newsletter editor for the KUAFF local.