It is almost Black History Month as Wendy Sheridan, Mary McGinley, and Robin Renée welcome you to this week’s episode of The Leftscape. February 1st is National Freedom Day, which honors Abraham Lincoln’s signing of a joint House and Senate resolution that later became the 13th Amendment. Also coming up is the seasonal holiday of Imbolc and its secular analogue, Groundhog Day. On February 5th, the Year of the Pig begins and on that day we are also invited to celebrate National Shower with a Friend Day! Birthday nods and remembrances this week include Jackie Robinson, Portia de Rossi, Brandon Lee, Lisa Marie Presley, Ronda Rousey, Farrah Fawcett, Elizabeth Blackwell, Alice Cooper, Rosa Parks, and Trayvon Martin. 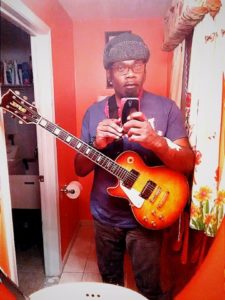 Featured in this episode is Robin’s interview with John Cecil Price, Philadelphia-based promoter and guitarist most recently with THe BaPTist pReacherS. He believes that art and music are storytelling, and that telling your story is, by its very nature, a political statement. As a self-described “loudmouth, opinionated huckster of unpopular thought,” he has a lot to say on topics including the nature of political parties, love, Baby Boomers, Gen Z, singer/songwriter Laura Marling, Permit Patty, The Mummers, cargo shorts, and the silver lining of a Donald Trump presidency.

Want to stay politically engaged? Write to your representatives with Wendy Sheridan’s (Post)Cards Against Fascism! Support the Kickstarter project today, get your copies of Wendy’s new political postcard designs, and make your voice heard!

Listen to the music of John Cecil Price on SoundCloud:

Watch the Guardians trailer (the “Russian Avengers” movie Wendy couldn’t remember the name of in the podcast):

Get ready for Puppy Bowl XV!