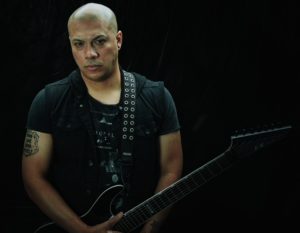 The Leftscape is excited to share an extended interview with Doc Coyle, guitarist for the platinum-selling band Bad Wolves and host of The Ex-Man podcast. A day before heading out on a major tour of Europe, Doc took the time to share candid thoughts on leaving his former band God Forbid and the impetus for starting his podcast, how meteoric success with the song “Zombie” changed the game, and the strange circumstance of having become part of the story of Cranberries singer Delores O’Riordan’s untimely passing. In conversation with Robin Renée, he takes us on an astute journey through his thoughts on the experience of people of color in rock/metal music, opening possibilities within black culture, artists speaking up about politics (or not), the problems with hyperbolic partisan thinking and the need to turn the dial toward empathy. 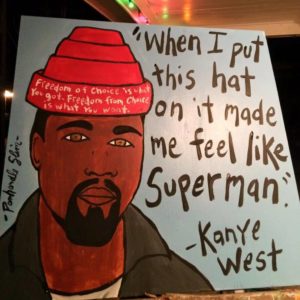 Mary McGinley expresses frustration with the news this week, as it seems no one is taking Trump to task for the truth about his self-made man myth having been revealed in the New York Times. Major world events are happening including the murder of journalist Jamal Khashoggi, but people are distracted by Kanye West’s visit to the White House. The comment leads to a discussion of a painting by Panhandle Slim (Scott Stanton) of Kanye wearing a Devo energy dome. Robin is psyched that Devo has been nominated for the Rock ‘n’ Roll Hall of Fame and fans can vote.

This week, we celebrate United Nations Day, National Food Day, National Bologna Day (because bologna isn’t really a food?), Business Women’s Week, Chemistry Week, and Massage Therapy Week. Among things that happened on this day are the last performance of Harry Houdini in 1926 and the founding of the United Nations in 1945. October 24th birthdays: The Big Bopper, Kevin Kline, Bob Kane, Bill Wyman, Drake, and Denise Levertov. Wendy Sheridan and Mary McGinley go on a journey through their favorite Kevin Kline movies and get a bit turned around about the plot of Sophie’s Choice. Wendy likes Kline’s current recurring role as Mr. Calvin Fischoeder in Bob’s Burgers.

Mary once worked as a magician’s assistant and performed the Houdini trick, “Metamorphosis.” Here it is performed by Harry Houdini’s brother, Hardeen.